what is your urge to buy a new computer? 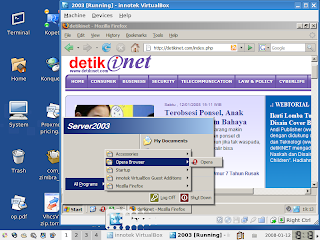 cant remember when the last time i bought a new computer. it was the latest technology when i bought it. it's celeron 800mhz which i still use till now. since then, i never (want) to buy any new computer. either it be laptop or desktop or even servers, i use 'old' refurbished computers.

now, all my computers are either pentium II or pentium III or celeron the most 'powerful'. i have one celeron on my laptop, pentium 3 on another laptop. 2 desktops with p2 inside. 1 mail server with p3 and another firewall/router/proxy using p3 also. and all the computers fully satisfy all my needs.

ooh... i forgot i just bought another refurbished p4 hyperthreading computer which i used at this very moment. it's only 2.8ghz and 512meg ddr1 ram. and i put latest centos 5.1 in it plus openvz plus virtualbox. now, almost everything is in this box. and coz too many servers i put into this box, it seem a bit slower, especially with it's only 512meg ram.

this. is my urge to get a new computer. coz i want to put dozens of servers (virtual machines) into this one box. i want my firewall/router/proxy in it. then a zimbra collaboration server. then web hosting platform, (maybe lxadmin hostinabox?). and maybe another dozens of other servers i can put into it.

for future-proof, the computer should be 64bit processor with virtualization technology. either intel multicore 64bit or amd64 athlon x2. we dont need server class platform (like xeon or opteron). nowadays, the desktop class processor already too fast for desktop causing programmers developing huge bloated apps like vista, openoffice and firefox. but for my servers, each servers can run nicely on p2-p3 with 256meg ram. so a desktop class multicore 64bit virtualization processors should be enough to run at least a dozen servers in it. (my server only serving 50+ users. no high load servers here.)

like the celeron that i still use, this new computer should last at least ten years and should only retire after/when it's dead. :) that's how i use my stuffs. my cellulars, my tv, my computers, all used up till the very end of their life!

so. what's your urge to purchase a new computer?

Anonymous said…
Who knows where to download XRumer 5.0 Palladium?
Help, please. All recommend this program to effectively advertise on the Internet, this is the best program!
10:32 PM

Thinstall is sort of a portable citrix ica client. one self contained exe file allow you to connect to any Citrix server from any windows computer without installation and without needing administrator right. so it will ease administrator a lot of trouble install and troubleshoot citrix installation. it can be run in a locked down windows where users are given very limited right and cannot install other apps on their own. because, that's how it's design, its self contained and run without installation. this quoted from their email: " The upcoming release of Thinstall’s Application Virtualization Suite 3.0 will be showcased at iForum. For those who want a sneak peek, the product will be featured at Booth #510 where you can experience the unprecedented Enterprise Class Application Virtualization. " mine, i put it in usb flash disk along with all configuration required to access my citrix server. so, anywhere i go with my flash disk, i can easily manage my citrix serv

this is based on my experience setting up gobloglah.com to offer free blog hosting to users. here's some features compared: first and most important (for me) is spam protection. my lifetype installation killed by spam because i cannot globbally enable spam protection for all user. while, most users care nothing more than blogging and do not know how to protect themselves from spam comment. with wpmu, you can globally enable spam protection for all users at once. so no worry about users forget or dont know how to enable spam protection. installation of wpmu takes less than 1 minute. simple and straight forward. everything works out of the box. even subdomain for each blog and nice SEO url enabled by default. i installed lifetype at least 10 minutes messing up with config files and not to count messing up .htaccess which take quite some tweak to make subdomain works. plugins. as with spam protection plugins, in lifetype, most other plugins must be setup in per user bases. in wpmu,

there're some x-win32 apps out there ... some are freeware and some donationware introducing... the free and opensource cygwin/x stripped down to under 20meg. no install. just unzip and run. get it here, while still hot... http://wiki.dennyhalim.com/xwin -- tips & tricks on computers and gadgets denny on IT ; let's doIT documenting the brain