after few times you do aptitude full-upgrade, you will end up with many kernel images. many people new to linux dont even know it's there. but it's there. and it can be many of them. wasting quite some spaces, especially if you're on old small 4gig harddrive, it matters a lot.

well... there're many ways you can remove old kernel on ubuntu. and here's my way..

first... find out which kernel installed:

that will also show installed old linux-header (source). you might want to remove them too.
now let's remove them:
that's all it.
that should reclaim at least few hundreds megs space.

guess what... it also works on debian and all distros based on these two.

--
tips & tricks on computers and gadgets
denny on IT ; let's doIT
Your Network & Internet Solutions
at 16:30 3 comments: Links to this post

blogspot now have a new gadget that allow us to put our blog list to our sidebar. you might already have blogrolls using some other services. maybe the google reader's or others.
but all that mostly using javascript! you get what i mean? js means only browsers can see it and search engine bots cant see your blogroll.

and you can guess it already. this new blog roll is 100% SEO and it can even raise your other blogs pagerank.


update: wonder why ajaxsearch do not include bloglist in the search result?

--
tips & tricks on computers and gadgets
denny on IT ; let's doIT
documenting the brain
at 08:32 No comments: Links to this post

rss feed alert to your messenger

get instant alert of my blog or any of your favorite news/blog feed to your instant messenger.
imfeed need you to sign up and logged in first. works great for me.
feedcrier says we need to confirm the subscription. but the confirmation message never arrive.
cant make zaptxt works. it always say the feed is not validated.

just found another great resources on htaccess blacklist by perishable press. it's called ultimate htaccess blacklist. similar to my previous close to perfect htaccess ban list from webmasterworld forum. but the htaccess have all the rewritecond in one single super long line.

also, it have very nice and almost complete htaccess stuffs.

then, it's also building so-called 3G - third generation - blacklist which include a bunch of redirectmatch stuffs. but be carefull with these. they could/might breaks your cms if you do not understand the logics there.

among all, i will certainly put this into my htaccess:
just go check it out for all those .htaccess stuffs and come back tell me what do you think and how you build your htaccess

--
tips & tricks on computers and gadgets
denny on IT ; let's doIT
documenting the brain
at 16:32 No comments: Links to this post

i just create another widget that allow you - easily,instantly - turns anything into a great free blogspot widget and share it on your blogspot. sort of "widget builder" widget.

just enter your owm custom html/js into it and your widget is ready to share!
and with 2 clicks, anyone can have your widget on their blogspot.

click and try it out! build your viral widget and share it to the world.
--
tips & tricks on computers and gadgets
denny on IT ; let's doIT
documenting the brain
at 07:38 No comments: Links to this post

not all tools here is tested but i try to gather information and found them somewhat popular.
here's some of them:
warn: i have not (yet) test them all. secure your windows with good antivirus and antispyware before trying any of them!


put this rapidshare search engine on your blogspot:


--
tips & tricks on computers and gadgets
denny on IT ; let's doIT
documenting the brain
at 15:57 2 comments: Links to this post 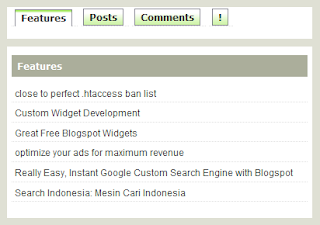 make any of your blogspot widget as tabview just like this one.

because i have problems pasting code in blogspot, you can copy and paste the code from my wiki:

and easily turn any of your widgets into tabview. no need to know about ajax/json or other high tech scripting...

tips & tricks on computers and gadgets
denny on IT ; let's doIT
documenting the brain
at 20:43 No comments: Links to this post